Warning Video Limited was an American home video distributor, established in July 23rd 1983. With the supervision of various other media companies such as Universal and Paramount, Warning Video Limited released many productions onto VHS, Betamax and LaserDisc throughout the mid-1980s to the mid-1990s. They filed for bankrupcy in May 19th 1997 and are now defunct. 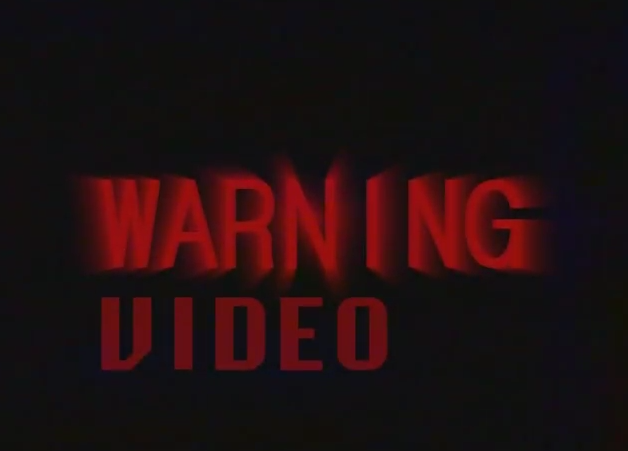 Logo: On a black background, the word "WARNING" in red, capital letters, and the ADGothic typeface fades in, glowing. It also zooms out and then stops. After this, the word "VIDEO" in the Chicago font fades in below it. After several seconds, the logo fades to black.

Variants: On a select few tapes distributed in 1993, the logo is silent.

Music/Sounds: A claxon, along with what resembles an explosion. This sound can be heard in the video game Super Smash Bros. Melee for the Nintendo GameCube.

Trivia: The logo's creator has stated that the logo was intended to display after FBI warnings as a scare tactic - to prevent people from pirating VHS tapes.

Availability: Uncommon. Most of the later tapes of television shows and films had this logo plastered with the respective production company's "Feature Presentation" or FBI warnings. Look on eBay for any "Warning Video" tapes/LDs of Universal or Paramount releases from the early 1990s.

Scare Factor: Nightmare. The ominous nature of the black background, the claxon, and the unfriendly text can give a massive sense of dread and cause bad dreams in many. The silent variant is decreased to low to high, since the claxon is abscent, but we still have the ominous text. The scare factor is lower for those who are used to it, however.