In the Southeast Asian countries of Indoaustralia (New Bombay, Camilla, and Pearl Islands), they mostly use the same Walt Disney Home Video logos as North America and other countries. The videos were distributed throughout Indoaustralia by Uptown Video Limited until 2004 when Walt Disney Home Entertainment Indoaustralia was formed. The videos were available in English and Camillan (a fusion between Spanish, Portuguese, and Southeast Asian dialects).
1st (known) logo
(1981-1985)
Logo: See the 1978 logo on the Walt Disney Studios Home Entertainment page for information.
Trivia: On some"double feature"tapes from 1984-1985, a few seconds of the Neon Mickey animation without music was used inbetween programs.
Variants:
Music/Sounds: Most tapes until around Christmas 1984 used the same fanfare as the original variant of the logo, but later tapes used a synthesized fanare that sounds similar to the music from "The Main Street Electical Parade" at Disneyland.
Availability: Rare, seen on the earliest Disney tapes distributed in Indosaustralia.
Scare Factor: Same as the Neon Mickey logo, but raised a little higher for the later variant due to the Moog synthesized music.
2nd Logo (closing variant)
(1985-1991, 1996) 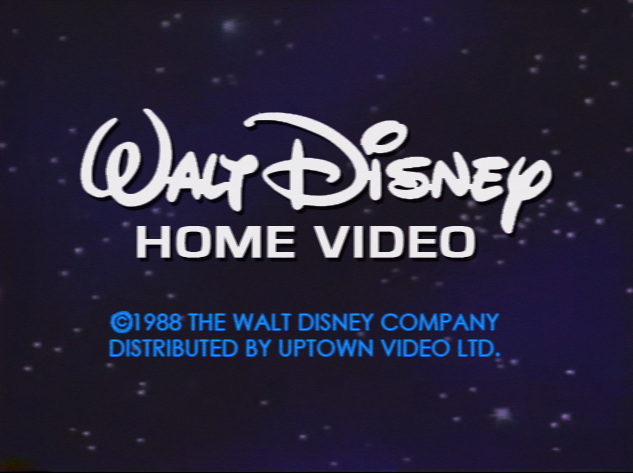