See this for real 1st logo. These are impressions for what if Trimark Pictures was still there.

Logo: On a gradient green background, the text "TRIMARK PICTURES" zooms in near the bottom of the screen in a gold font, with "TRIMARK" in the same font as the first logo. Suddenly, a triangle drops above the text. After the triangle finishes dropping, the lion's head (from the 1st logo) fades in over the triangle.

SFX: The triangle dropping, the lion fading in.

Cheesy Factor: The animation is too simple.

Scare Factor: Low to medium, the lion in the logo and the gun sound might scare some. 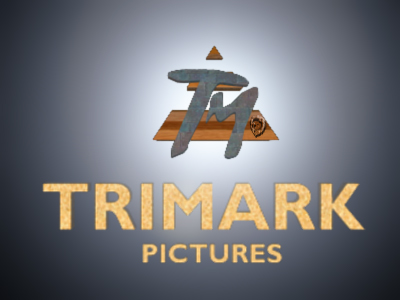 Logo: On a black background,the triangle(now in CGI and more lesser sections)from last logo,and with a wood texture,zooms out of the camera. Then,"TM"(stands for TriMark) writes in,in stone texture in front of the triangle. Then an lion head similar to last logo,only closer to its face,emerges in transparent. The camera zooms out and the CGI:
TRIMARK
PICTURES
fades in below the whole thing. A light shines behind the logo. Then we fade out.
FX:Everything.

Music:A remix of the 1st logo jingle(the one with the whoosh).