Background:TheSuperdog19 Productions was founded by TheSuperdog19 on August 4, 2010.
1st Logo
(August 4, 2010)
Logo:"THESUPERDOG19" spins out onto the screen.
FX:"THESUPERDOG19" spinning out.
Music/Sounds: The opening of the video.
Availability: Only found on "Webkinz Sketches" on YouTube.
Scare Factor: Minimal. The words spinning out may be surprising to first-time viewers.
2nd Logo
(July 29, 2013-Present)
Logo: "TheSuperdog19" appears while "P R O D U C T I O N S" appears below it.
Variants: There are too many variants to list, but here are a few notable ones:
FX: Usually none. It depends on the video.
Music/Sounds: This also depends on the video.
Availability: Common. Can be found on most of TheSuperdog19's recent videos.
Scare Factor: None. Minimal for theRandom Webkinz Skits 3variant.
3rd Logo
(August 9, 2014) 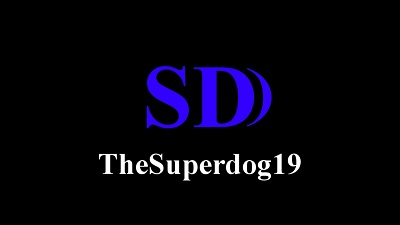