Background: In 1983, director Sherri Stoner and then-Hanna-Barbera employee Tom Ruegger co-founded their own production company, using their surnames as the company name, and leased a previously-vacant office building in Studio City, California for their headquarters. The same year, SRP struck a deal with H-B (ironically), Amblin Television and Warner Bros. Animation to produce syndicated television cartoons (including animated shorts) for 49 years and co-produced several cartoons with the latter throughout the 1990's and became a division of Warner Bros. Animation outright in 1987. During The Weekday Cartoon Extravaganza Show (1985-1991) days, SRP produced the animated Tiny Toon Adventures shorts, before Tiny Toon Adventures became a full half-hour series in 1990 and also co-produced the animated Jetsons shorts after 1987 and the animated Flintstones shorts with Hanna-Barbera on the same show. After those original TTA skits, SRP worked with Warner Bros. Animation and Steven Spielberg to produce the half-hour series, which ran from 1990-92. In 1986, SRP and WBA co-acquired the Hap Shaughnessy founded-and-owned Bilsonessy Cartoons (with WB also acquiring distribution rights to Bilsonessy titles from Viacom Enterprises); followed in 1991 by the acquisition, solely by SRP, of South Detroit Production Warehouse, in both acquisitions SRP also acquired the rights to their characters. Also in 1991, SRP relocated their headquarters to nearby Burbank and co-produced the animated The Warners, Pinky and the Brain, Slappy Squirrel and Goodfeathers shorts with Warner Bros. Animation and Spielberg for the first two seasons of The Allen Alan Show until the characters of those four segments all were incorporated into the half-hour Animaniacs series (September 13, 1993-November 14, 1998), another SRP-WBA-Spielberg tri-production which also included other characters SRP acquired from SDPW. In addition to those two shows, SRP, along with Warner Bros. Animation and Spielberg, also produced the 1992 animated revival of Gilligan's Island, Frekazoid and Pinky and the Brain (later re-spunoff into Pinky, Elmyra and the Brain), among others. Following it's crippling semi-bankruptcy in 2000, SRP was folded into Warner Bros. Animation. Today, Stoner-Ruegger still survives as an in-name-only unit of Warner Bros. Animation for distribution and marketing of properties and productions associated with Stoner-Ruegger's and SDPW's works. However, not all cartoons co-produced by S-R are owned by Time Warner such as the following: Night in the Woods (first and second seasons co-produced by SRP and the third and fourth seasons were co-produced by Klasky-Csupo, DNA Productions and CBS Television Studios/CBS Television Distribution) the 1995 animated adaption of Hogan's Heroes (also currently owned (in this case solely) by CBS Television Studios/CBS Television Distribution). Warner Bros. has no kind of rights to any of these series listed. 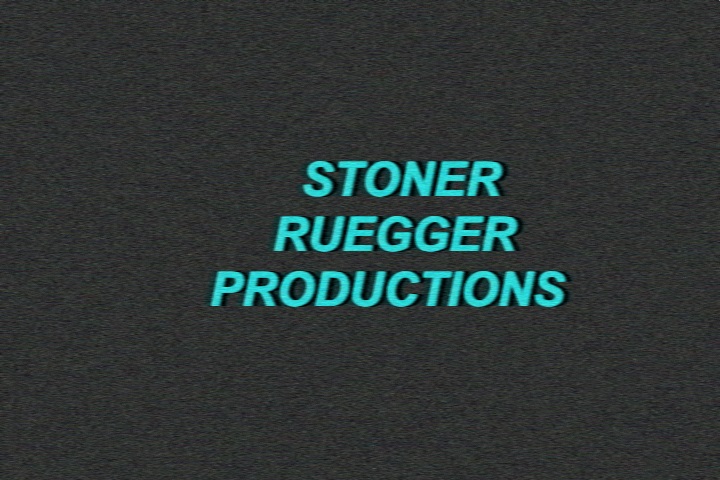 Nicknames: "The Text", "The Text of Boredom", "The World's Most Generic Logo", "Hey, this reminds me of PBS' very first year!", "Stoner-Ruegger Boredom"

Logo: Just a black background with the words:

stacked on top of each other.

Cheesy Factor: The logo is too plain. It was probably a placeholder for the next logo. Not to mention the quality is also pretty bad for a logo that debuted in 1985.

Music/Sounds: The end theme of The Weekday Cartoon Extravaganza Show.

Scare Factor: Low. Though not widely seen, the darkness might get to some. Otherwise may cause possible boredom.

Logo: On a dark blue gradient background, a rainbow star swirls down from the top, leaving behind a purple trail. It then settles into the center of the screen as it twirls, occasionally shrinking and twisting, forming a circular trail. It then twists into the middle of the circle and comes to a stop. The words "STONER-RUEGGER PRODUCTIONS" in Courier font appear below.

Availability: Uncommon. Appears on the remainder of the first season of The Weekday Cartoon Extravaganza Show and plasters the previous logo on pre-1995 VHS releases of the first eight episodes of said show. This logo also made a surprise appearance at the end of Tiny Toon Adventures: How I Spent My Vacation.

Scare Factor: Low. The animation, combined with the music can startle some, but this logo is still a favorite of many and is very popular even though it was only used for six months, excluding it's surprise use on Tiny Toon Adventures: How I Spent My Vacation.

Logo: An updated version of the previous logo, but now done in CGI. The trail is now metallic, and the star now realistically twists and turns and has a nice shine effect. The text is in the same font as the previous logo (before 1988) or in the Century Gothic font (starting in 1988) and is slightly smaller.

Trivia: Airings of the Animaniacs episode "The Presidents Song/Don't Tread on Us/The Flame Returns" on Kid's WB used the 1988-1993 version of this logo instead of the standard "Character Portrait II" logo.

FX/SFX: Same as above; nice CGI, a good achievement for 1986 and brighter colors, but…

Cheesy Factor: ...it doesn’t work as well as it's predecessor for some reason. The path has been changed to look “looser” and it simply doesn’t look as visually appealing.

Music/Sounds: Same as the previous logo or the closing theme of the show.

Availability: Uncommon. The original version was last seen on seasons 2 and 3 of The Weekday Cartoon Extravaganza Show and mid-80's prints of Bilsonessy titles, following the 1984 Warner Bros. Television Distribution "Shield of Staleness" logo with Warner Communications byline, which plastered the Viacom filmed "V of Doom" or "Pinball" logos. The 1988 version can be seen on the remainder of The Weekday Cartoon Extravaganza Show (starting with season 4) on DVD releases of the show, Tiny Toon Adventures (on DVD releases and formerly on The Hub, now Discovery Family) and the first season (1992) of it's first spinoff The Plucky Duck Show and the first season of the 1992 animated revival of Gilligan's Island. Can be spotted at the end of Taz-Mania as well, but that show hasn't been seen since the late 90's. Don't expect this on The Allen Alan Show, as SRP only produced the animation for four animated segments of that show and nothing else (Steam Train Productions and Warner Bros. Television logos typically appear at the end of that show). 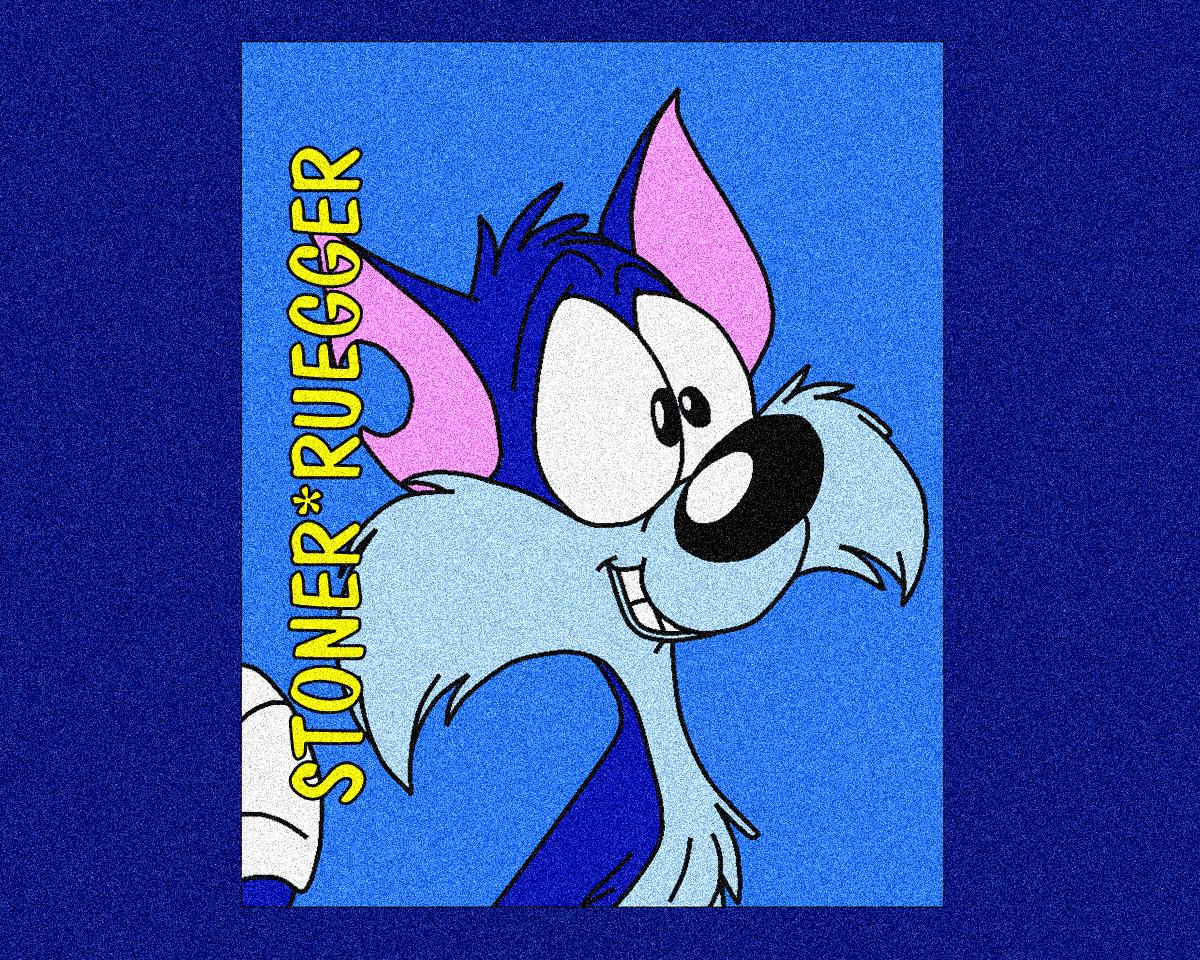 Logo: On a colored background, we see a partial picture of an SRP star inside a geometric shape. Somewhere inside that logo is the text "STONER*RUEGGER" in the Dom Casual font (created in 1991).

Custom Variants: This was customized for each show produced by SRP during this era and is available only that specified show or TV movie:
FX/SFX: Depends. The closing variants are still, but for the opening variants, it's the zooming in for the opening Animaniacs logo.

Music/Sounds: A random cartoon sound effect. It’s different for each logo. Sometimes the opening and closing themes of the show play over the logo instead. On Animaniacs, a zooming sound is heard which crescents into the opening theme.

Music/Sounds Variant: On mid-1990's Romanian dubbing prints of Tiny Toon Adventures, the logo is silent. The same situation occurs with a Polish dubbing print of one first-season Animaniacs episode.

Availability: The availability is different for each variant, but overall, uncommon bordering on rare:Scare Factor: None to medium, depending on the variant. It depends on what you think about the sound effects.

Logo: On a blurry white background with several colorful abstract shapes flying about, we see a clear square/oval that provides a “clear” view of the flying shapes; the square/oval has the text "STONER*RUEGGER" in the Dom Casual font embossed in it at the top. Suddenly, we see several of SRP's characters (mostly from Animaniacs and Tiny Toon Adventures) running through the logo, as the square/oval begins to rotate. At the end, one of the characters ends up coming towards the logo, ending in a very extreme close-up of the character. A very small byline reading "A SUBSIDIARY OF WARNER BROS. ANIMATION" appears in the lower right. Depending on the show genre, one of these two similar but very distinct variants of this logo is used; one for SRP comedy shows and the other for SRP action shows. The characters, “music” and logo shape differed depending on the logo. Here are the stars for each version of the logo, in the order that they appear:
Trivia: This logo was designed and animated by Charlex Studios. First seen on the first episode of season 2 of Animaniacs, last seen on Pinky, Elmyra and the Brain.

Variants:
FX/SFX: Nifty combination of 2D animation (the characters) with cool 3D elements (the SRP shape). This was done by Charlex Studios.

Music/Sounds: Same as the Hanna-Barbera Comedy and Action logos.

Availability: Common due to being the chief means of plastering, though not as bad as you might think; it was typically on “new” post-1994 prints of SRP-produced shows. In most cases, they match the right logo with the right show; the exception is one episode of Pinky and the Brain, which uses the "Comedy" logo due to a poor plastering job, as well as the second Tiny Toon Adventures special Tiny Toons' Night Ghoulery, which uses the "Action" variant. Warner Bros. still uses this logo today to plaster older SRP logos on certain newer prints, excluding Bilsonessy shows (though it was used on the 1960's Pinky and the Brain due to it being a Bilsonessy-Stevens Film Works (the predecessor to SDPW) co-production), which in most cases only have the WBTD logo or no logo on DVD prints. The "Comedy" variant also appeared on Pan-European prints of the the 1992 animated revival of Gilligan's Island preceded by the previous logo. The "Comedy" variant was also seen on Animaniacs (season 2) and is intact on said show's Volume 3 DVD, at the ends of cartoons produced by SRP between 1995-97, airing on World of Toons (later known as The World of Toons Show). The "Comedy" variant also appeared on The Hub (now Discovery Family) airings of Tiny Toon Adventures, plastering the previous two logos, and also plasters the first two logos on Russian dubbing prints of The Weekday Cartoon Extravaganza Show.

Scare Factor: Depending on the variant:

Logo: Like the 4th logo, a still of an SRP star in a shape, usually an oval. The star is always the one that has been featured in the show that has just ended, so there are quite a number of variations (some variations have 2 or more stars). The background is almost always white. Below the logo, there is a Time Warner byline.

Trivia: First seen as an in-credit logo on That's Warner Bros.! and World of Toons, the standalone version was first seen on the short Furrball in Taken from Space/X-Ray Survival and first seen regularly on the premieres of Pinky and the Brain and season 3 of Animaniacs.

FX/SFX: None. This was done by Hatmaker Films in Boston, MA.

Availability: Depending on the variant.

Scare Factor: Minimal to low. The laugh could get to some people. None for the silent variant.

Nicknames: "The Rising SR Star", "The Return of SR," "Stoner-Ruegger Strikes Back!," "Welcome Back, Stoner-Ruegger", "The Rising T.A.T. Star Ripoff"
Logo: Up against a dark blue (and almost black) gradient background, we see the text "SR" inside a rounded black box. The rainbow star from the 2nd logo (except the colors are more vivid) rises from the background and places itself between the S and the R. "STONER-RUEGGER" wipes in below. This product is similar to the alleged 1980 T.A.T. Communications Company logo.
FX/SFX: Good animation and the star is a nice throwback to the 1985 logo.
Cheesy Factor: The star reeks of cheesiness.
Music/Sounds: The opening or closing theme of the film.
Availability: It was first seen on the direct-to-video movie Animaniacs and WWE: WrestleZanyMania!. It also appears at the end of the new Animaniacs reboot to debut by the end of 2017 on Netflix.
Scare Factor: Low to high. The text is extremely big and in your face, but at least the star adds a nostalgic touch.