Background: Shaymin Films was created by Will L. Shaymin in 1985. Their first short was A Bad Haircut. It was very funny and people liked it a lot. Today, Shaymin Films is a popular film company and they even participated in the film UP! 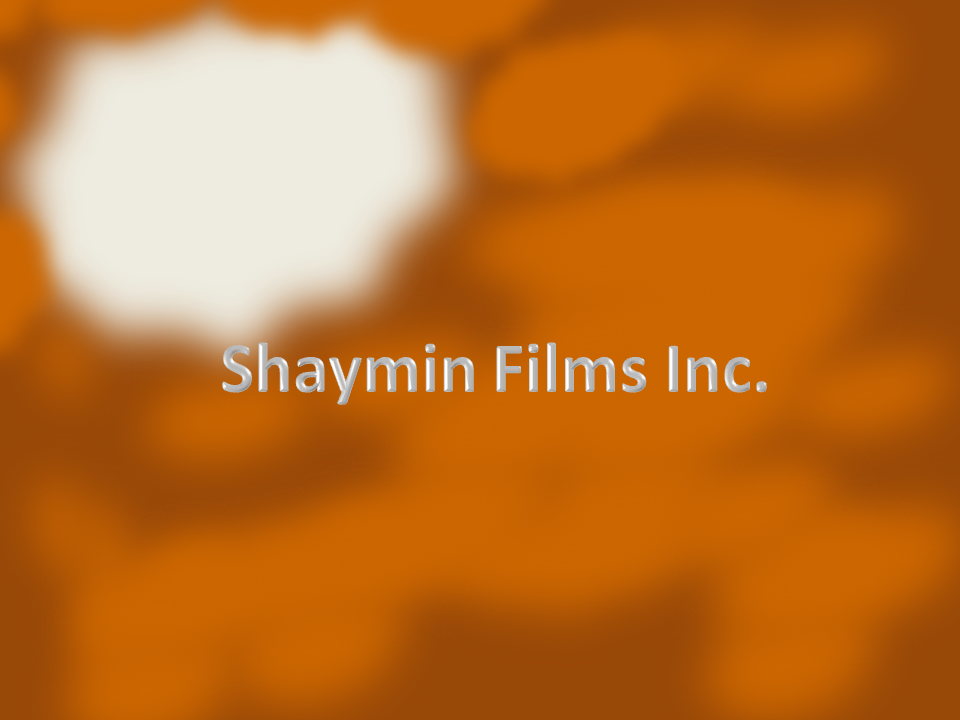 Logo: We see a white background. Then the logo zooms out and we see some brown clouds that are moving on a darker brown background. The words, "Shaymin Films Inc." fade in a Calibri font.

FX/SFX: The zooming out and the text fading. This logo is pretty good for the 80's.

Cheesy Factor: The effects are still a little cheesy.

Music/Sound Variants: In the short, Give Me My Sock! a 4-note guitar tune replaces the orchestral fanfare.

Availability: Rare; Seen on many shorts from the time.

Scare Factor: Depending on the music variant: 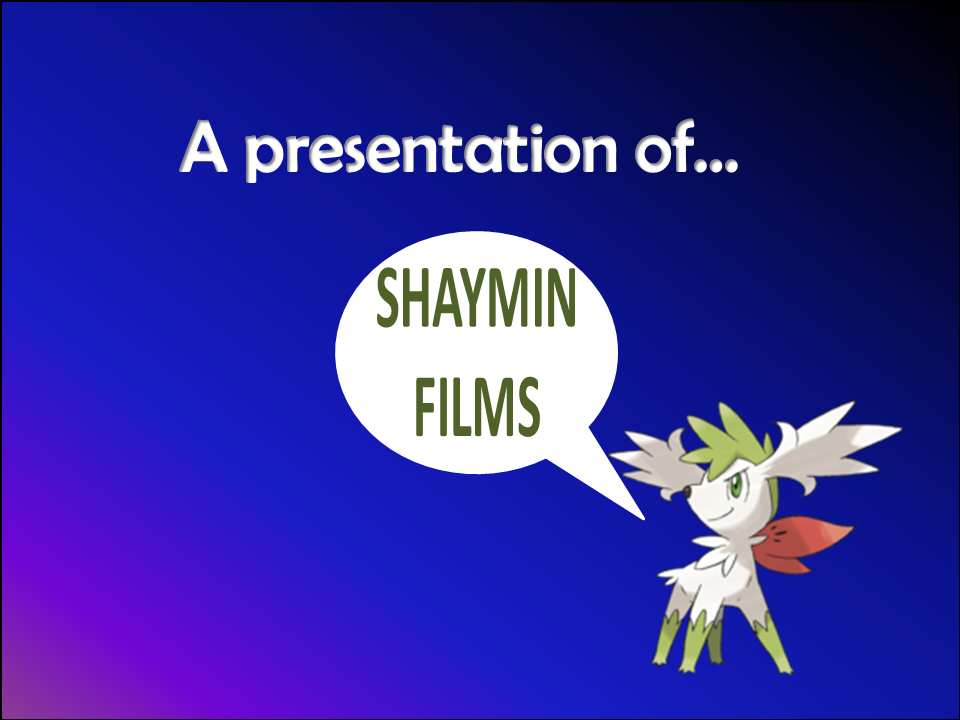 Logo: On a purple, blue, and black gradient we see the words, "A presentation of..." those words rise up to the top of the screen. Then the Pokemon Shaymin (Sky Forme) zooms in. Then a speech bubble that has the words "SHAYMIN FILMS" in it pops up.

Trivia: This logo has Shaymin the Pokemon in it as a joke because the creator's last name is "Shaymin".

FX/SFX: The text rising up and Shaymin zooming in.

Cheesy Factor: This logo is not as good as the one before.

Music/Sounds: A pop when the speech bubble pops up.

Availability: Uncommon; can be found on some tapes of movies from the time. 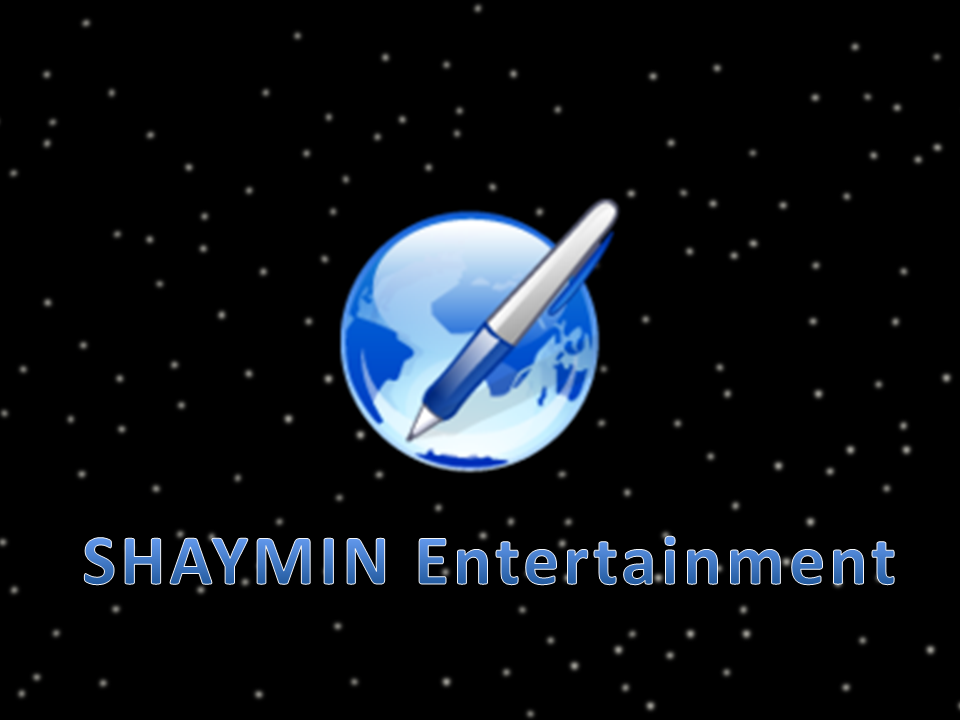 Nicknames: "Pen and Earth", "No Shaymin"

Music/Sounds: An extended version of the 4-note guitar tune from logo 1.

Scare Factor: None; This logo is kind of cool. 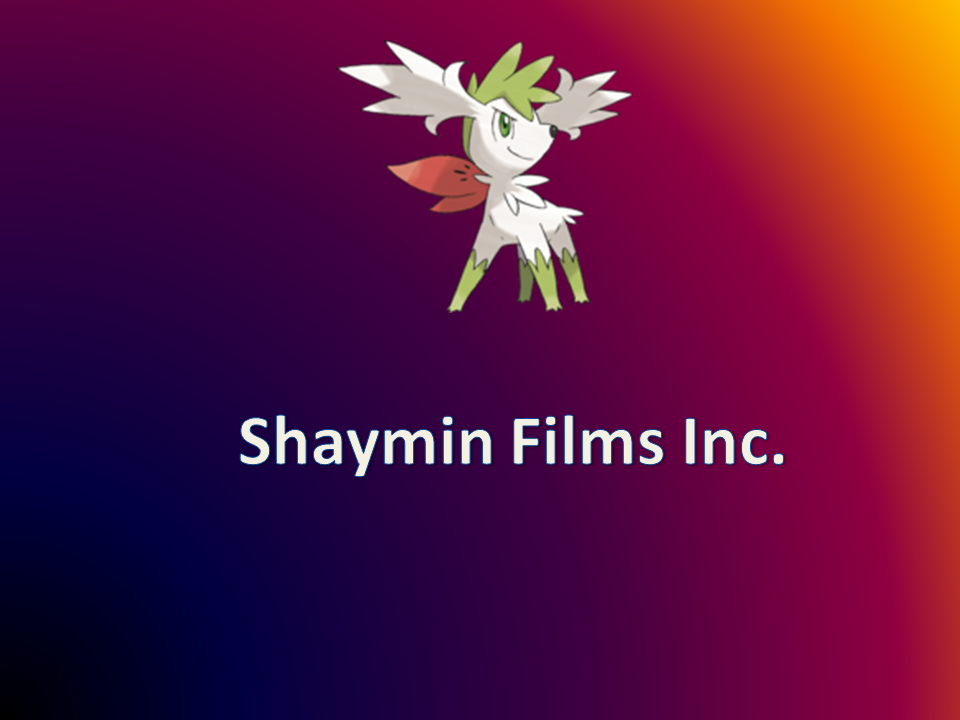 Logo: On a black, blue, purple, and yellow gradient BG we see a chair. Shaymin walks next to it and then jumps on it. The chair flies away while Shaymin rises to the top of the screen because of his big jump. After that the words, "Shaymin Films Inc." zoom in.

FX/SFX: Almost all of the logo.

Availability: Uncommon; seen on shows Shaymin Films participated in at the time.

Scare Factor: None; This is a cool logo. 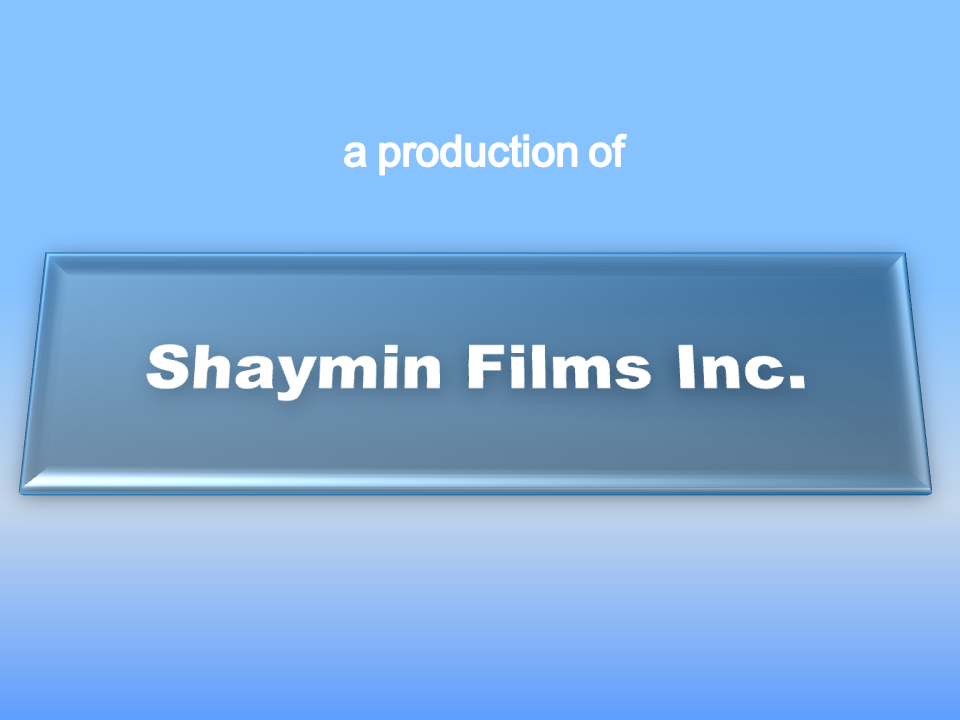 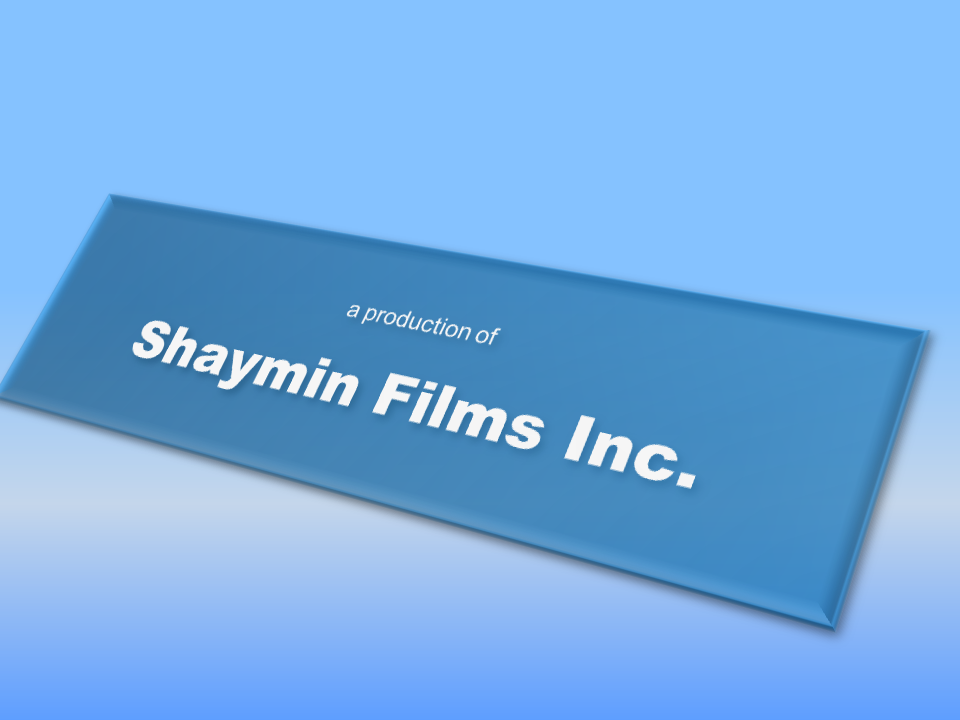 Variants: There is a variant where the tray is at a different perspective and the words "a production of" are in the tray.

Scare Factor: None; This is a cool logo too. 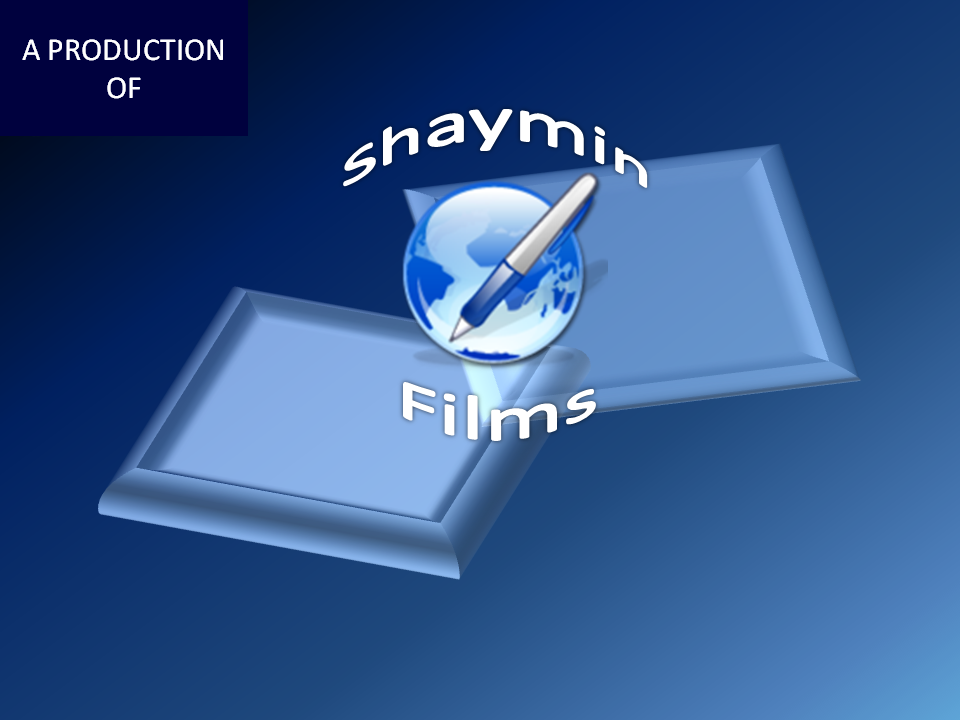 Logo: We see stars. Then the logo drops down diagonally. When the logo is doing that we start to see blue. Then after the logo is done dropping we see a black/blue gradient BG and we see two squares moving closer to each other. When they hit the logo flashes and then we see a blue box in the top-left corner with the text, "A PRODUCTION OF" and the same pen and earth from logo 3. Around the earth and pen are the words, "Shaymin Films".

FX/SFX: The squares coming together and flashing.

Variant: There is a variant without the "A PRODUCTION OF" box.

Music/Sounds: Some rumbling sounds and a clash when the squares hit.

Availability: Very Common; This logo appears on many shows Shaymin Films make and participate in

Scare Factor: Minimal; The clashing might scare some not used to it. 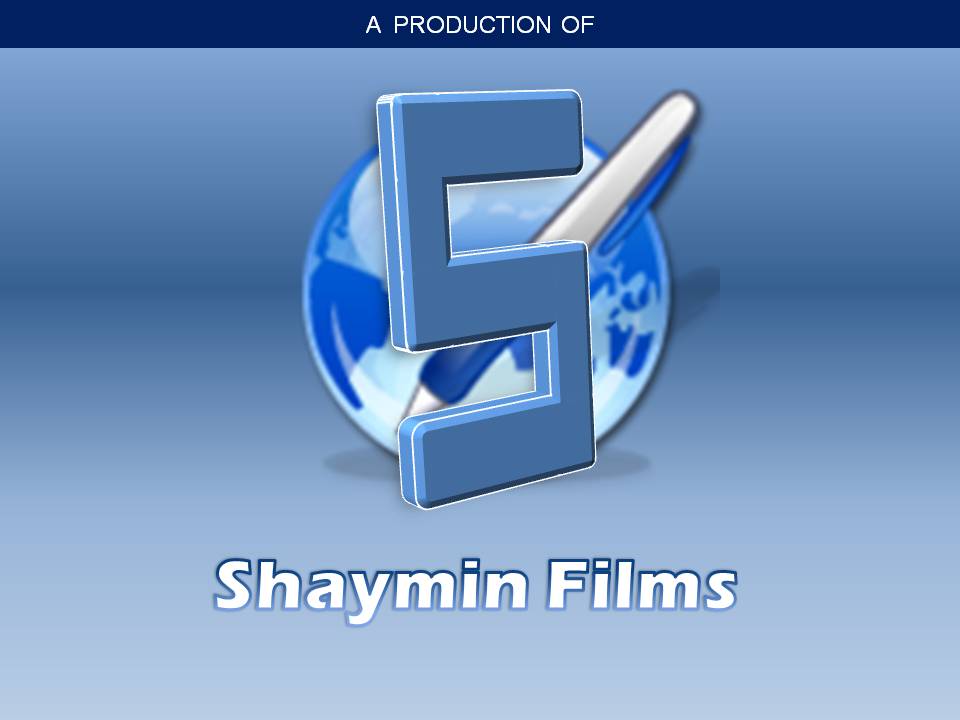 P.S. lukesams, stop messing with my stuff. SnowflakesOmega and wolfie14, you can edit my stuff.

Logo: On a blue gradient BG we see a blue strip fade in with the words, "A PRODUCTION OF" . After that we see the Pen and Earth zooming in. Then a 3D "S" comes in with fancy CGI effects. Next, the bottom of the screen flashes and the words "Shaymin Films" appear.

FX/SFX: The "S" coming in is done with SUPER CGI effects.

Variants:
Music/Sounds: Whooshing sounds when the "S" comes in.