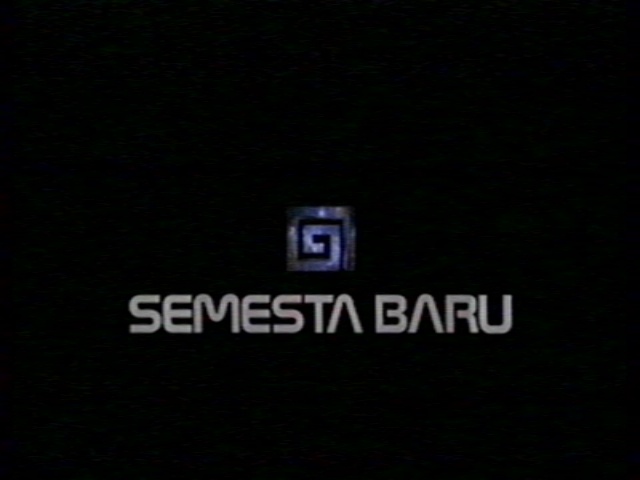 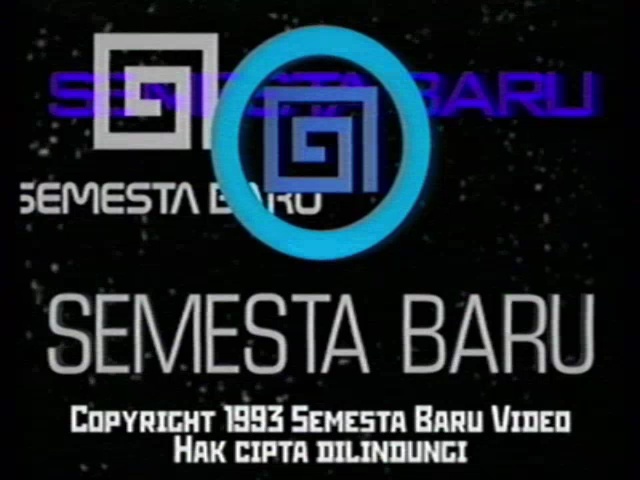 Nicknames: "Too Many Semesta Baru Logos", "A Name To Remember", "The Logo Of Attention", "Multiple Logos of Doom", "Semesta Baru of Attention", "Cheesy Semesta Baru"
Logo:On a starry background, two orange lines come out from both sides of the screen and "crash" with each other (which is not seen because the lines were just dissapearing), causing a burning asteroid to appear and fall. The asteroid rises again and "SEMESTA BARU" appears on the top. A yellow star then comes out and brings up the snake logo from the previous one, with "SEMESTA BARU" appearing below it. A cyan ring then zooms out and the snake logo appears again, but this time in blue, by fading in and spinning. The 3rd appearance of "SEMESTA BARU" occurs, with the text looking at the top, suddenly rotating to view the screen. The other logos remain on screen. The copyright fades in below.
FX/SFX: A mixed bag of 3D CGI.
Cheesy Factor:First off, the background is just ripped straight from the 1st Key Video logo and looped throughout the whole animation. 2nd, the animation: so at the beggining it starts like the Compañia Colombiana De Video Y Cine logo. OK, so two lines come out and go to the center. But in this case, they just dissapear EVEN if the lines aren't really that near. But let's keep moving on with the logo, and we will have this: the company name appearing for FOUR TIMES AT ONCE on a single logo. Just why? Did they wanted to catch the viewer's attention? And the ring looks pretty high-tech for the time, even if the other elements aren't textured really that well.
Music/Sounds: A powerful dramatic fanfare, that is originally from the Tat Fung Movie Enterprises logo.
Availability:Extremely rare. This logo was pretty short-lived and used around 10 videotapes before using their newer logo. Few examples are fromKoneksi VCR,Bermimpi tentang apa-apa andBerpaut.
Scare Factor: Medium to high. The ridiculous animation and loud music will catch you off-guard. Although this is more cheesy than scary and having their name being displayed that many times is just making it a bad logo.
5th Logo
(1994-1996) 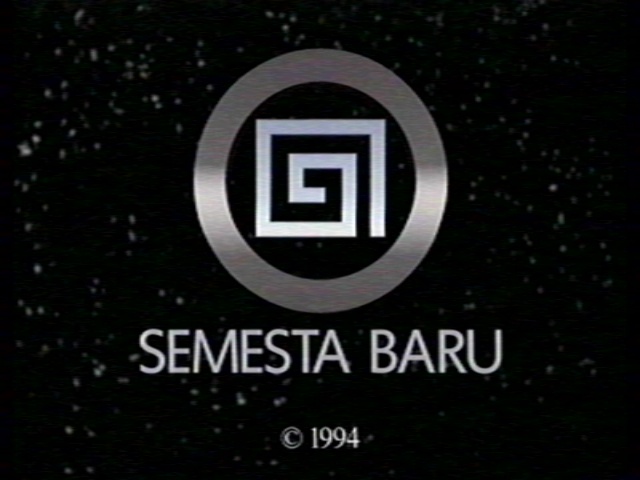 Nicknames: "Semesta Baru of Steel"
Logo: We zoom out from a silver Semesta Baru logo (like the last one from the previous logo, but with the textures different) on the same 1st Key Video starry background. The snake and ring rotate (with the ring being the most active) and later look to the screen. "SEMESTA BARU" comes in zooming out, looking at the top and rotating to the camera. The copyright mark and year later fade in below the logo.
FX/SFX/Cheesy Factor: Much better, although less interesting animation. But you'll still be asking why they were still using that starry background.
Music/Sounds: Same as the previous logo.
Availability: Rare. Appears on 1994-1996 VHS from them including underground/mid-budget Indonesian movies like Berpaut II andItu adalah waktu yang tidak pernah berhenti, and obscure TV shows likeAcara Dingin.
Scare Factor: Low to medium. This is not as very ridiculous as it's predecessor.
6th Logo
(1999-2001)
Nicknames: "Semasta Baru of Boredom"
Logo: On a black background there's the white plain Semasta Baru logo in style of the 3rd logo.
FX/SFX: None.
Music/Sounds: None, although on a 1999 VHS ofGadis Selatan, a deep bass note was used.
Availability: Used in tandem with the 3rd logo around 1999-2000, sometimes being followed by that logo in very few 2000 tapes (like on a print ofDia datang as an example), and was later being used as a primary logo from 2000 onwards, including their first VCDs and DVDs. Mostly can be found on mid-budget TV shows and movies distributed by them during that time.
Scare Factor: None.
7th Logo
(2001-2005)
TBA
8th Logo
(2005-2015)
TBA
9th Logo
(2015-)
TBA