Background: Scotia Video was founded in Truro, Nova Scotia in 1982 as a distributor of independent films, anime, cartoons and foreign horror and B-movies. In North America, their releases were distributed by Goodtimes Home Video, Sony and later by Virgin Video, with some releases co-distributed by Medusa Communications. They are still operating today, but their videos can usually be found inside any video bargain bin or in a thrift store. They still distribute movies on VHS, most often reprints of older releases and recent independent films. 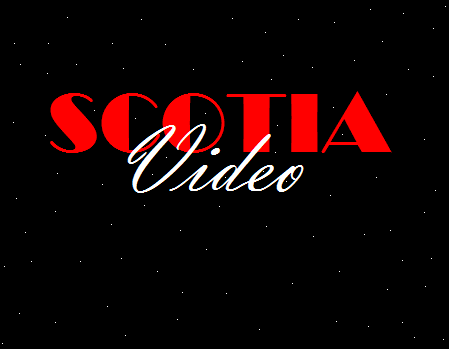 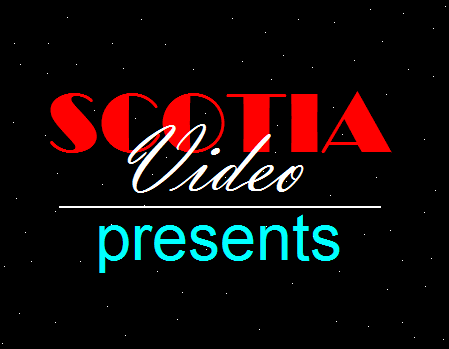 Logo: On a starry, black background, we see the outlined word "SCOTIA" zoom in with a cheap, trail effect and settle above the center of the screen. After that, it flashes and becomes a solid and red version of the word. "Video" writes itself in, in a cursive font below it with part of the top overlapping "SCOTIA". A white line appears below the logo and the large turquoise word "presents" slides up and settles below it.

FX/SFX: All the animation in the logo.

Cheesy Factor: Typical animation for a 1980's logo, but what is the point of the white underline? And why should the word "presents" be huge?

Music: A descending synth bass note then a laser "zap" sound effect when "SCOTIA" flashes and a 10-note triumphant and rising synth tune.

Availability: Common, appears on early VHS, laserdisc and Beta releases from the company. Toei Animation's Call of the Wild, Top Cat, Chapi Chapo, Angel (Jim Terry's dub of Hana no Ko Lunlun) and Kimba the White Lion were among several cartoons that were distributed on video by the company at the time. Strangely enough, some tapes from 1987 to 1988 used the logo before the previews!

Scare Factor: Low, the light effects and synth may bother some people, but the next one is worse.

Nickname: "Scotia is WATCHING YOU", "Big Brother"
Logo: On a starry, black background, we see two disembodied eyes zoom in and then look straight at you. Next, the words "SCOTIA VIDEO PRESENTS" spell one letter every 10 seconds under the eyes.