Background: Nippol (a portmanteau of "Nippon" and "Poland" - also known by its full name as Polish-Japanese Animation and Film Export Group) started life in 1967 as an animation licensing company called Polmacja Export Group (portmanteau of Poland and "animacja") based in Warsaw. At first, the local government only permitted the company to license animations from neighboring Socialist countries Czechoslovakia, East Germany, Hungary and the Soviet Union among other Socialist countries. In 1973, the company switched its focus to dubbing anime and Japanese films into Polish, citing Poland's good relations with Japan and the government had finally permitted imports of Japanese cartoons.

In 1975, the company had its big success marketing anime with Polish dubs of Go Nagai's Dororon Enma-kun (1973) and Osamu Tezuka's Wansa-kun. Both cartoons became popular in Poland, with re-runs frequently occurring on TVP, Poland's national TV network, since then. Traditionally, a Nippol dub would keep the show's background music but translate the dialogue and replace the opening and ending theme songs, with the newer songs usually becoming hit singles.

Sometime in 1980, many of Japan's famous anime and manga artists heard about the success Nippol was having in Poland and requested producing co-productions (by which an animation studio in Japan would produce a TV series and Nippol would co-produce it and dub the series for the Polish market). Nippol's founder, Jacek Kowalski, agreed to this idea and the government permitted this provided that none of the shows imported have any negative portrayal of the Socialist system and that the dubs were not heavily merchandised. Merchandise was usually no more than postage stamps, plush dolls and a record of the show's soundtrack. Toei Animation and Nippon Animation were initially the animation studios agreeing to this deal, but then TMS and Tezuka Productions, among other animation studios in Japan, agreed.

Among other imports, Toei Animation and Hanna-Barbera's sequel/remake of Top Cat, made and broadcast in 1981 to celebrate the cartoon's 20th anniversary, also became popular in Poland. During the same decade, Nippol collaborated with Toei and TMS to make numerous cartoons that became very popular in Poland and Japan during this time, such as Little Longtail and Sofia and Sebastian. Since its inception, numerous famed Polish musicians were involved in the newly recorded themes for these shows, including Seweryn Krajewski, Jacek Cygan and Papa Dance (real musicians).

From 1989 to early 1991, however, Nippol began to enter bankruptcy after Poland abandoned Socialism; but in 1991, TMS gave Nippol the rights to dub the immensely popular anime Soreike! Anpanman into Polish (known as Herochleb, lit. Hero Bread), which eventually drove Nippol out of bankruptcy and encouraged the company to continue licensing anime. The company still exists and has not shown any sign of bankruptcy since then. 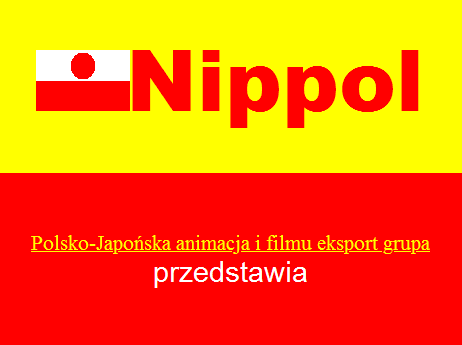 Logo: On a black background, two colors (the top half yellow and the bottom half red) slide in from the left and right respectively before passing each other and sliding off. Then, the red half slides in again but stops when it reaches the center of the screen. The yellow half slides up from behind the red half with the Nippol logo on it, the red text "Nippol" in a bold font accompanied by a white/red square with a red circle in the center (the flags of Poland and Japan combined). In the red half, the yellow words, "Polsko-Japońska animacja i filmu eksport grupa" (Polish-Japanese animation and film export group) fade in underlined (with some of the letters protruding) with the white word "przedstawia" (presents) below it.

FX/SFX: The colors sliding and the text fading in. The logo is clearly unprofessional.

Cheesy Factor: As far as logos from the 1970's go, this one certainly ranks among the most unprofessional. It's clearly cardboard animation or something like that. One must ask themselves, "Why doesn't South Park make fun of this?".

Music/Sounds: A wind chime sound when the colors slide in and four church bells when the text fades in (some anime fans from Poland have compared it to the school bell commonly heard in Japan).

Availability: Common, this logo has never been plastered and re-runs or video releases of their programs will invariably have this logo. Examples of Nippol's dubs include Wansa-kun, Dororon Enma-kun, Toei's Puss in Boots, Dororo, Princess Knight and the first two adaptations of Gegege no Kitaro.

Scare Factor: Low, the wind chimes might surprise anyone not expecting them.