Background: In 2005,after watching the final SFM ++10(?) showcase,somebody (I can't remember) had a cat named Marie. He had an idea: he formed a company (but anyway wasn't official). The name from the showcase and his cat, and you have MariFranSia. The first three logos are official (on logostrikebeta1 {now logostrikebeta2}'s showcases with logos as characters, or just a logo showcase), and the4th logo is for him.

REAL LOGOS
1st Logo(2005-2006)
Logo: In a house, the camera zooms into our mascot "Marifransia", who's sleeping in a chair. The camera gets too close to the mascot, getting a flash that warp us to a red background, then it zooms out to reveal that it's a red disc (held by a person), setting into a plastic green big wide Lego block. We zoom out to give a full view of the motif, then the text "Marifransia Motion Pictures" appears on the green block.

Variant: A short version exists which is just the end of the logo.

FX/SFX: All recorded with a digital camera and put together.

Music/Sounds: On NET Set, it's the 1976 CPT theme. For the Production Logo Galery[sic] trailer, it's the trailer's theme (a rock version of the Super Mario Bros. Underground theme).

Logo: On a shaded blue background, we see a blue block, with a sphere popping up (supposed to represent sun and sea), then the logo turns to face us, and: 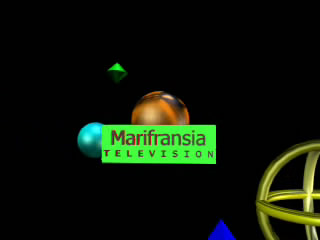 Logo: On a black BG,we see the words "Released thru" in white,after a second,it cuts to many shapes in the same black background,in 3D, the Marifransia logo itself, which is a sun depicted by a flat sphere through a block, and are supposed to mean sun and grass, appear, while the text "Marifransia" is in the block, and the camera rotates randomly, then a purple cube comes into view, wipes the word "T E L E V I S I O N" and the camera moves to the right.

Music/Sounds: A 10-note tune, which sounds like something from the New Super Mario Bros. Overworld Theme.

Availability: Extinct, since logostrikebeta1 was suspended and his company's logos were in that user. Although,you can download this logo and the music for the next logo here.

Scare Factor: Median, the sudden tune can catch ya off-guard. 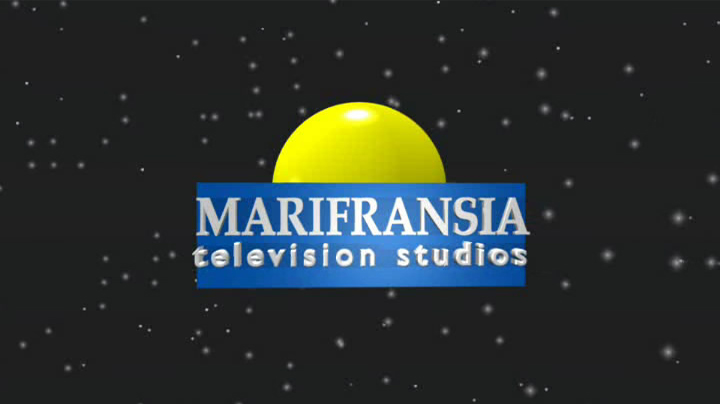 Logo:The words "RELEASED THRU" fades and zooms in then fades out. Fading in is what appears to be a space BG with an all-new Marifransia logo (the block is blue). "MARIFRANSIA" in white then emerges from the blue block,then "t e l e v i s i o n s t u d i o s" also in white, zooms out from view into the block. The space BG, appears to be sorta patterned, keeps zooming in until the end of the logo.

Music/Sounds: Some eerie sounds,then a funky 17-note horn fanfare. On the 2nd variant, it's same as the last logo. The whole jingle sounds eerie, even if you're wearing headphones.

Scare Factor: Minimal because the music is almost as loud.