Background: Earlessness home video was founded in 1988 by Charlie Faults as in late 1987 he found an Earless cat out in the street. He later found the cat at an adoption home, and adopted him. He named his home video company after his cat, Earless.

Logo: On a sky blue background, we see a white earless cat behind the text:
EARLESSNESS

Home Video
Variants:
- The normal variant, Duh.
- A special super rare variant was used on Kitty Care. it used a sea green background with A grey earless cat.
- During the very end of this logo's life cycle, the cat has a red collar, and the text is dark blue, and the cat meows at the end.

FX/SFX: Look above, also, no animation.

Cheesy Factor: It is a still logo.

Scare Factor: Minimal, The fact that the cat has no ears could freak a few out.

Logo: On a white background, a head of an earless cat head complete with whiskers meows. With the text Earlessness Home Video Appearing overlapping the cat head.

Variants:
- The normal variant as explained above.
- The head from the next logo was used.

Music/Sounds/Variants:
- The normal version has cool cat lounge music playing followed by a ding.
- The version with the head from the next logo has electro music followed by two dings and an announcer saying "Earlessness!"

Availability: Very Rare. It was seen on tapes of Earlessness In Paris, and some episodes of Kitty Care 101.

Scare Factor:
Depends On Variant.
- Minimal for the normal variant. It's a head.
- Low to medium for the head with the next logo on it. It will startle you because you will be expecting the other logo. Not to mention the electro music. 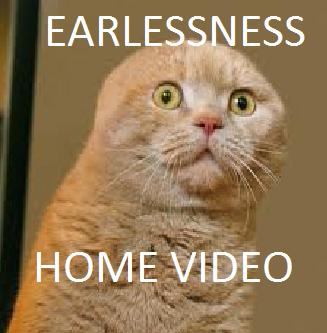 HOME VIDEO
Variants:
- Normal variant.
- Occasionally, the company would put in the very popular "Scared Earless" video in, and it does not say Earlessness home video, but instead says "Scared Earless"
- An ultra rare variant has been reported to exist. it features a mirrored cat with a black background. Supposedly seen on Kitty Care 101, the episode, Kitty Towers. If you can find that episode, you can find the logo.

Scare Factor: Low. The cat could set people off.

Logo: On a white background, we see Kreepy Kat from the DNA productions logo. he starts laughing evilly. Then, Scared Earless Bumps into him and sends him flying, literally. The text shines.

Variants:
- The normal one. OK!
- A specially used variant was also made. Where kreepy kat said, I GET IT! before earless bumps into him. And goes flying himself.

Cheesy Factor: Cheesy! It looks bad, like it was done completely on MS Paint!

Availability: Common. If you look anywhere towards the end of the company's life cycle, you will find it.

Scare factor: Low to medium. Kreepy Kat is an unsettling sight, and so is the Earless Cat! not to mention the evil laugh. But it is a funny logo.