Background: Cute Little Alien Productions is a video company that distributes Japanese anime, Japanese cinema and a tokusatsu series, among other genres. Its most well-known subsidiaries are Anime World (anime), Action Media Network, and ZX Tokyo (Japanese cinema). All of the shows and movies produced by it are being rated by G, which does not contain profanity and any adult content. In 2001, Uzamaki Productions purchased this company. 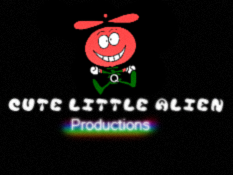 Logo: On a black background, we see Quisp (from Quaker Oat's Quisp cereal) in his anime appearance. Below him is the Japanese text (かわいい宇宙人·プロダクションズ) that translates into the company's name, turning into "Cute Little Alien" in a Bomb font and "Productions" in a Kartika font with a rainbow on the bottom. Quisp was drawn by Narutou Uzamaki (not the ninja guy!).

Availability: Mainly seen on some Japanese anime and other shows from the era.

Scare Factor: Medium. You may be surprised because of the music and the background's darkness, but it is a cute logo.