In 1953, Central Television, aka CTV, was started as a local network in central Arvet. One of its affiliates was WJDM-TV, channel 62, in Newton. On a side note, WJDM was the only TV station in the Newton area at the time. In 1978, it became available to many more by turning to cable to get more viewers. It made the transition complete in 1981 by selling WJDM to John Walker Enterprises (today's "Johnwalker Enterprises"). Unfortunately, CTV is retired on 1985 and folded to DLC Television. Some of the shows' reruns are distributed by Wrona Entertainment.

Logo: A white circle appears against a black background. An announcer says, "This has been a presentation of CTV." The letters "CTV" in Arial font appear in the circle corresponding to the announcer saying the letters. 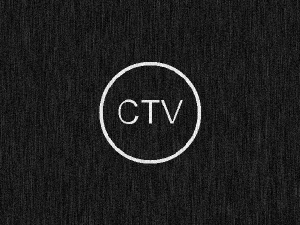 Logo: Similar to Logo 1, but instead of the announcer, it has 3 tones that represent a high note, a low note, and a middle note, for C-T-V, respectively.

Music: 3 synth piano tones that represent a high note, a low note, and a middle note, for C-T-V, respectively.

Scare Factor: Low for the main variation, median for the cello variation.

Logo: After a flash of light, various grey circles come out of nowhere in an orange background and star spinning wildly. They then stop and the circles separate and form into three thick circles and the circles begin to keep turning sideways until it stops, then the circles combine into one even thicker circle and the words "CTV", colored in blue, appear in the circle and the logo zooms into it. The logo then glows and disappears into the series's title sequence.

Availability: The 1966-1971 variant is ultra rare, only found in VHS tapes while the latter variant is uncommon, as you can still find on reruns on shows at that time.

Scare Factor: Low bordering on Medium for the former variant, as the fanfare could be considered as dramatic to some people. Medium for the latter variant as the whoosh is too loud when you see it in cable, but not in the tapes.

Nicknames: "Yet Another Circle"

Logo: Three black circles dash from the top in a green background, the bottom left corner and right corner and then form into what looks like a Venn Diagram. The circles spin very fast clockwise and then stop. The upper circles then lower down so that the circles are horizontal. The letter "C" appear in the first circle, then the letter "T" appears in the second circle and the letter "V" appears in the last circle. They then separate, forming the logo.

Cheesy Factor: The simple graphics and animations are starting to be considered cheesy.

Availability: Common, the logo has been resurrected for the reruns.

Scare Factor: None to Minimal, the whoosh has been better from the third logo and the music is interesting.